By Volunteer Houston on January 2, 2015 in Motivational Stories 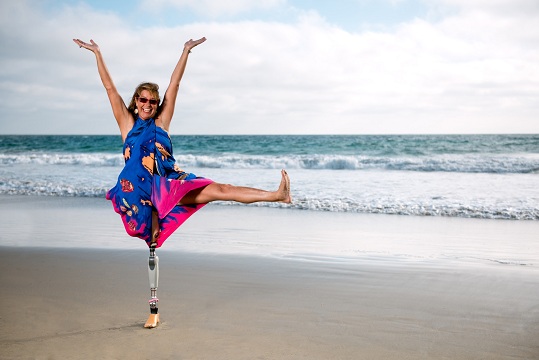 Everyone has dreams of who they want to become when they grow older, and Adrienne Slaughter always wanted to be a pro tennis player.

CBS Los Angeles reports that Adrienne was a tennis star the moment she entered high school, gaining notoriety for her future in professional tennis. However, everything changed the day she was diagnosed with bone cancer, at the age of 14 during her freshman year. The tumor began in her knee and had already spread through her leg, reducing her chance of survival down to only 1%., leading her to opt for chemotherapy, radiation and surgery.

By the time she awoke from surgery, she knew they had taken her leg in order to save her life, and with that gone were her dreams of becoming a tennis star. She moved one easily, finding new things to enjoy and living her life to the fullest, until the she was blinded by more bad news.

Adrienne would have to fight off a new cancer this time. She was facing an adversary many of us know well, breast cancer. Without skipping a beat, the doctors sought out the cancer and Adrienne immediately opted for a double mastectomy in order to remove all possibility of the cancer spreading further. She has given so much of her body to cancer in order to keep the fight going, and every day she is thankful to be alive.

These days, she is 5 years cancer free, and happier than ever. She often shares her story with other patients in order to motivate them to fight harder, and to survivors so they may all heal and grow. Even well into her 40s now, Adrienne plans on competing professionally in tennis as soon as she receives a grant that will allow her to get a brand new leg for athletics.

She may have lost her leg, but she will never lose her competitive spirit or her dreams she has held close her entire life. Adrienne is prepared to battle a new foe, a competitor on the courts, and she has all the skills she needs to beat this one without any doctors.