By Volunteer Houston on July 16, 2014 in Motivational Stories

As it is so easy to take life for granted, we were grateful to come across this video of 2-year-old double amputee, Kayden Elijah Kinckle learning to walk.

The beautiful baby boy is filled with confidence, joy and refuses to give up even though his first steps with his walker and prosthetics are shaky as he tries to find his balance. The emotional clip was shared by his mother who was there to support him the whole way. Around the 1:03 mark Kayden champions through exclaiming, “I got it! I got it! I got it!” as he continued to power down the hallway smiling as though he has no worries. 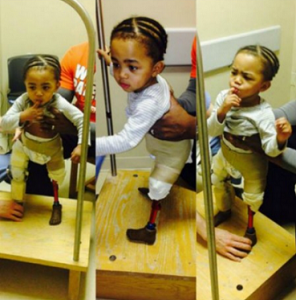 Kayden was born with a rare birth defect called Omphalocele, which caused him to be born with some of his organs outside of his body. Immediately after his birth he underwent 2 abdominal surgeries. Also, while in the womb the umbilical cord became wrapped around Kayden’s legs and feet, which led to the amputation of his left leg and right foot in January.

The Kinckle family is raising funds to give Kayden a great life with improved prosthetics as well as to be able to cover his medical expenses. The inspiration video has already garnered more than 780,000 views and worldwide support.

If you need an example of how to step on faith, defy all the odds against you and still remain joyous, Kayden is the perfect example. Share his story, walk with a little bit of his cheerful spirit and see what greatness is in store for you today!