By Volunteer Houston on April 27, 2014 in Charitable Fun 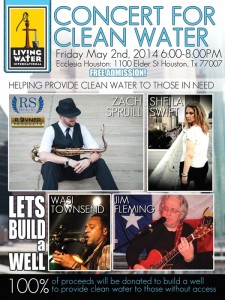 How would you like to be a part of something that has a positive, direct impact on the lives of so many people? Thanks to an incredible partnership between Living Water International and several wonderfully talented Houston musicians, you can attend the Concert for Clean Water event and make a difference!

With more than a billion people around the world getting by on less than $1 a day, approximately 783 million people don’t have access to safe drinking water. For these people, poverty seems to be a never ending cycle as they suffer from parasites and other water-related diseases, or have to spend a lot of their time carrying clean water over long distances.

For those reasons, the non-profit organization Living Water International is invested in bringing water to people worldwide, and has impacted communities in more than 26 countries around the world since 1990, having completed more than 10,000 water projects.

While this concert is free, merchandise will be sold and donations are greatly appreciated as 100% of the proceeds will be put toward the $5,000 needed to build a new well for those in need.

Head out to Ecclesia Houston from 6-8pm on May 2nd, 2014, to enjoy coffee and the sounds of Houston artists, such as Sheila Swift, Zach Sprull, Jim Fleming and Wasi Townsend. Thank you all in advance for supporting such an amazing charity event! If you can’t attend but, would love to make an impact, click here!

Help Save the Lives of Houston Wildlife With TWRC!
Memorial Hermann Children’s Hospital Can Always Use A Hand!