By Volunteer Houston on May 25, 2014 in Charitable Fun 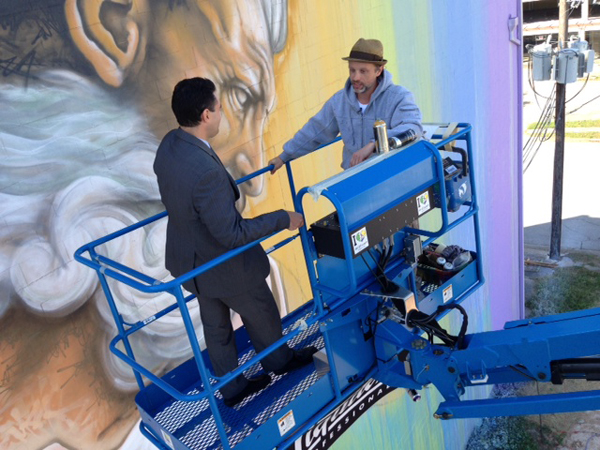 While there are many different forms of art to appreciate, urban art still remains one that many people don’t understand. If you’d like to check out some very cool street art, while raising money for a good cause, we’ve got the perfect event for you to attend, The Biggest Mural in Houston!

Eyeful Art and UP Art Studio have teamed up with community partners Texan-French Alliance for the Arts, and The Midtown District have to raise public awareness for community centered art with “Preservons la Creation,” which will be the largest mural in Houston’s metro area. Located at  2800 San Jacinto Street, the mural is a city block wide, 60 feet high with 80,000 square feet of surface area.

Created by Sebastien “Mr. D” Boileau, who has been largely influenced by American graffiti, the completed mural will be unveiled on June 7, 2014, from 3pm to 11pm along with food, entertainment, an art show, and the largest installation of “Open the Door” that has ever been done! General admission is $10 and VIP tickets are also available for $100 for an early preview on June 5th, with a portion of the proceeds going to the Houston’s children’s hospital mural project, which will begin construction 2014-2015. Get your tickets by visiting their event page.

The Biggest Mural is also looking for people to sponsor, volunteer, host, or donate to the event as well, so if you love community street art there are plenty of ways to get involved! Plus, volunteers will have access to the VIP areas, and will receive an event t-shirt. What do you think about this amazing addition to Houston?